We have some Dreamhackathon winners amongst us!

News
We have some Dreamhackathon winners amongst us!

The Dreamhackathon last weekend was quite a good one for Futuregames! This giant event took place at Globen in Stockholm, where a total of 27 games competed for some excellent cash prizes and more. Both the winning team and the runner ups featured members who have studied at Futuregames. 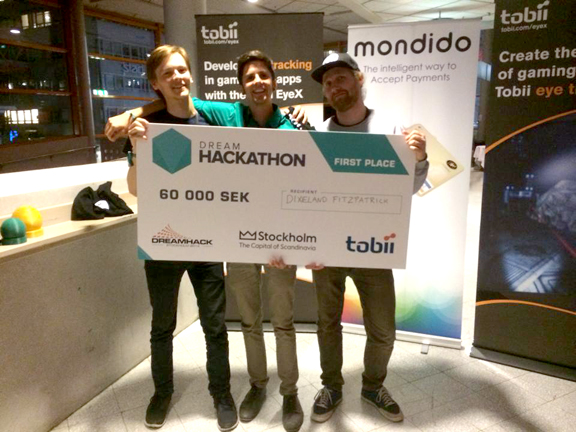 The winning game was Dixieland Fitzpatrick, a music based game for Oculus Rift where the game play centers on avoiding obstacles that pop up. This game was developed by Marko Permanto, Joachim Holmer and Jonas Kjellberg. Marko and Joachim are Futuregames graduates and they occasionally come in to teach a class as well! The group was awarded with a cash prize of 60 000 SEK.

The runner up was a game called “Spurf”. A clever game where the difficulty changes depending on the music played through Spotify. Spurf was made by Leo Toivo, Daniel Öhrlund, CA Ewerbring and Sebastian Andreasson, of which Leo is a current student at Futuregames. In fact, he has just started studying here, so you’re off to a very good start, Leo! This group won a cash prize of 30 000 SEK.