This week, Futuregames launched our first game project for 2022! As far as we are aware, no other game school in the world has attempted such a large-scale game production across so many different game-development disciplines! We are really excited that we have been able to include both our QA/Game Testers and Project Management students to our teams of Artists, Designers, and Programmers.

They will work with a project brief that was carefully selected by: Starbreeze Studios, Star Stable, DICE, MachineGames, Toca Boca Hazelight Studios, Fatshark, King, Ubisoft, and more… to produce and release a working game build in 4 weeks!

Why are we doing this?

“Part of our learning process is to collect information in a systematic manner before collating and combining it to come to an innovative concept.”

“The starting point is that whether you are a game artist, project manager, game tester, game designer, or a game programmer..  we all share the same fundamental interests in learning. You wish to understand the world better, even if you come at it from different approaches, different ways of researching something and different ways of expressing the results.”

For students in our QA/Game Tester program, this is probably the first time that they are actively involved in the game projects this early in their education. “Playtesting, it is never too early to do it. As soon as you have a prototype, as soon as you have squares moving around on a screen, you can test,” says Andrew Allen, our Education Leader. In fact, you can often run tests well before you have got anything digital to work with, creating a prototype out of spaghetti, or even getting a bunch of people to run around a room can yield valuable data.

Building bridges between various disciplines often delivers some wonderful results. “Students often arrive at surprising things. If they do something they are fully behind and something they put themselves into, they do much more than when asked to merely tick a few boxes and sit an exam later. This is how teach and learn from each other on a daily basis at Futuregames. Learning by doing, learning by reflection,” adds Ghazal Taghavi, Head of Education – Game Artist.

We will continue to bring you more updates on the progress of Game Project 2, watch this space!

For more information about our game educations, click here.

Who are behind the mad idea? 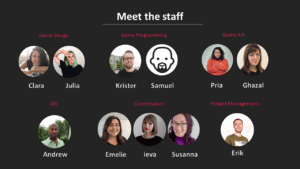 We are happy to announce that it is time for Futuregames Online Open House – on February 15th!

Regarding Game Artist in Stockholm

Information about the Game Artist (Specialization) education in Stockholm.

Here are the YH-Educations for 2023

We are delighted to announce that we will continue to bring you our flagship YH-educations this year!