FutureGames is the Second Best Game Dev School in the World

Today FutureGames was crowned the runner-up at The Rookies Awards as the second-best game development school in the world. The Rookies hold an annual award for the most creative schools across the globe with a focus on the quality of the students’ portfolios.

“More than 410 game developers have studied at FutureGames in the last 10 years and we’re very proud of the ambition and passion our students show to get this international attention. Out of the 600 yearly applications to the school, the number of international applicants is increasing and today we have educated individuals working at game companies all over the world – FutureGames is growing internationally. We are incredibly proud of what our students have accomplished and it’s a big honour to be crowned as one of the best schools for game development in the world. We keep growing and 2018 has the largest class of junior game developers starting their journey through FutureGames. 120 ambitious students are now prepared for the upcoming two years and we keep growing together with the Swedish game industry”, says Mattias Escudero Liljeqvist, Head of Educations at FutureGames. 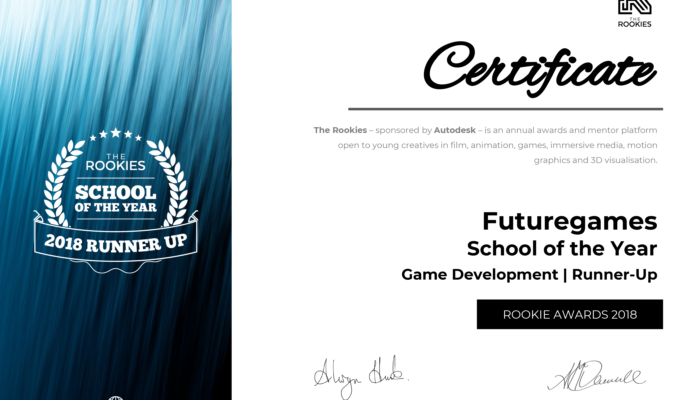 We have provided vocational education and game development courses since 2008 and have a very close connection to the Swedish game industry. Companies in our Board of Education includes some of the largest game companies in Sweden such as Starbreeze Studios, King, Avalanche Studios, Fatshark Games, EA DICE, Paradox Interactive and Glorious Games Group. Together with the innovative companies of the Swedish market, we make sure that our students are ready for the industry when they graduate.

“The game industry is one of Sweden’s most successful trades that convert more than the film and music industry. With today’s smartphones games have spread to almost all ages. This is an industry and a form of expression that will continue to play a big part for entertainment, but also for education and public welfare. Games engage people and gamification can be used in all industries. We’re very proud of this award at the school”, says Tom Loyche, CEO of Changemaker Educations.

FutureGames ends up as runner-up after Howest University – Digital Arts and Entertainment in Belgium. On third place we find Ringling College of Art and Design in Florida, USA. The Rookies announce the world’s best game development educations based on the students’ employability, their creative and technical knowledge, presentation and variety of portfolios.

You can find the complete list from The Rookies here: Best Game Development Schools in the World for 2018

Here are the YH-Educations to Boost Your Knowledge for 2022 and beyond..