Mehrnaz Amanat Bari is a programmer in the fast-growing games industry. In a male-dominated world, she has made it a personal goal to inspire more women to dare to code by holding lectures and be a mentor for young girls. Today she’s awarded with the Elisabeth Tegner Scholarship for her burning dedication to change the image of who can become a programmer, as well as her contributions to the games industry.

– I want to inspire more women to let go of demands, dare to break the norm and stand out, because that’s what you must do as a female programmer today.

– And I’m a strong believer of that you’re the best leader if you do what you’re passionate about and are the change you want to see. My goal is to make a lasting impact on the games industry globally, says Mehrnaz

The fact that there are still few women working as programmers depends on several things according to Mehrnaz. It starts in the childhood, when girls and boys expect to like different things. It’s also about how the few women that do educate themselves or work as programmers are often offered alternative careers. She believes that the big problem is the fact that it’s a factor all the way from childhood and how society looks and that influence your choices later in life as well.

– I have been offered roles to become a director or project manager instead several times, perhaps because I’m very engaged in other topics than just programming. I have felt that I need to fight to keep working as a programmer. Instead, I think the companies should aim to offer female programmers technical career paths with bigger impact and responsibility, as well as to lift them as role models. Everyone want different things of course, but there won’t be any long-term changes if you chose to internally recruit the women who are already working as programmers for non-technical roles.

Mehrnaz was born in Iran and grew up in Lund. As a sixteen-year-old she moved to Stockholm with her family and later began studying engineering at KTH with a focus on bio technology. After a few years as an IT Consultant and later working as a Merchandiser at H&M in London, she felt that she was missing input and joy in her work, and started to rethink her career.

– It was actually my boyfriend who got me to try out programming for the first time. I was a bit skeptical at first, but when I sat down with the code it was love at first sight. I got completely hooked!

The step into the games industry

After further studies within programming technique at Uppsala University and KTH, she started to seek out the games industry. An industry she had long found interesting, and where she saw that she could make a big difference since games reach such a broad audience today.

– I contacted Paradox Interactive for my final thesis but was instead offered a job that I accepted. The first day at the office I was shown around and introduced to all colleagues as their ‘first female programmer’.

At Paradox, Mehrnaz was part of the team that developed the popular video game Stellaris. Two months ago, she switched company and today she works with Frostbite, a game engine that is used to create many of the games for Electronic Arts.

– Generally, there aren’t that many women at the game companies. There has been a positive change today compared to when I started. I notice this myself and the statistics also shows it. I do, however, wish that there were more women that were programmers in the industry.

Mehrnaz has been engaged in getting more women interested in programming for a long time. Among other things she has hosted workshops for Tjejer Kodar and Tekla. She was a driving force in creating a collaboration between Kodcentrum and Paradox Interactive to make creative learning materials in digital, learning and programming. She has been a speaker at Women in Tech, Game Developers Conference and has held lectures at schools. She is also a project member of Female Leader Engineer and has also been a participant in Valkyrie Jam, a game jam for ten women, ten days in Boden.

Preconceptions about who can become a programmer

– There are a lot of preconceptions about how you’re supposed to be in order to be a programmer. Even when I’m at schools, where the students may not be more than 10 – 12 years old, there is a certain perception about what’s girly and boyish. Girls don’t like games, they don’t like coding, according to the students.

– If I stand in front of a class as a woman and show that I’m both a programmer and a game developer, maybe then I can make them rethink things a little.

Mehrnaz thinks that it’s important to inspire girls already from a young age since it’s important that every person gets the opportunity to discover what they think is fun and what they want to work with in their lives.

– It’s also very important in order to influence the atmosphere at work places. You need a larger diversity to create a better work environment and more productivity. At EA there is a lot of work with inclusion to create more diversity, starting as early as at the recruitment process.

Mehrnaz has also chosen to be a mentor for girls and women that are interested in getting into the programming profession.

– I’m pleased If I can influence one person to dare to be themselves, to dare to try something new.

– It gives me so much energy when I succeed at it, and influence someone to dare to swap industry and to see the person get their first programming job. The programming profession involves big possibilities for development and variation for those who chose it!

The programming profession includes the possibility to keep developing, according to Mehrnaz. The programming languages are changing all the time, as well as the complexity in the problems that need to be solved. You put up your own limits and can always chose to deliver more than what’s expected of you.

– The games industry is also exciting because it’s always at the leading edge. This is where you drive the technology forward, and later all the other industries follow. You get the opportunity to work with a large variety of techniques, including everything from physics, graphics, AI and network programming to game logic.

– I really want to make an impact on the games industry. When I was at Game Developer Conference we were a hundred people at one of the Round-Table events, whereof only two women. When you talk about programming the men are usually in the spotlight. Those who hold the presentations are usually men. I want to show that you can be a woman and code and be super nerdy, and that you can succeed and make a difference, Mehrnaz finishes.

Last Friday Mehraz Amanat Bari was awarded with the Elisabeth Tegner Scholarship, a scholarship that was funded by Changemaker Educations with the purpose of lifting female role models within the tech industry. The scholarship was awarded at the Womengineers ten-year anniversary gala in Stockholm, in front of a crowd of 200 people who all share the goal of getting more women into tech professions. 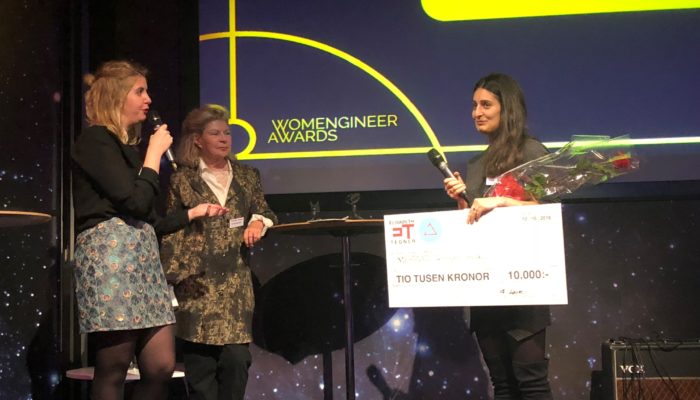 We are growing and need to strengthen our team in Boden with a structured Head Teacher for our new two-year vocational program "Futuregames QA Tester". Does this sound like an exciting position?

Send us an E-mail and we will tell you more!