Jacob Stenberg, perhaps better known as “Daydee” to many, isn’t just a first year student at Futuregames 3D Graphics, but also a well known face within esports where he competes in Super Smash Bros. Melee. Jacob is the best player in Europe as the character Samus, and is ranked as the fourth best player in Sweden. With his aim on a career in the games industry, Jacob is bringing his experience from the competitive world with him.

The game title Super Smash Bros. Melee (SSBM), the second game in the fighting series Super Smash Bros., was released in 2001 by Nintendo. Despite newer titles in the series, Melee is still the game preferred by players in the competitive scene. According to Jacob, competing in SSBM means a lot of training and analyzing but also traveling. “I’ve played Super Smash Bros. since I was five years old, but only found the competitive scene and community around it around four years ago. A friend of mine introduced me to it at a relaxed event and I thought it was strange that we played the old version of Super Smash Bros. After they explained different techniques, the depth of the game and why it was so cool, I got really interested.

Jacob got SSBM and started practicing at home and soon realized that he thought it was really well made. “It’s an incredibly fast game and you notice that they really got into the details, which has been removed in the later games”. The director and designer of the game, Masahiro Sakurai, calls it a ‘beautiful accident’ since SSBM was originally intended to be a party game rather than a competitive fighting game.

Last summer, right before Jacob started at Futuregames, he experienced one of his best competition memories. ”I was playing against Professor Pro, the best player in England, in front of 1000 people. It’s a really cool memory. I was so happy I banged my fist in the table and 15 Swedes run up and it becomes a crazy thing on stage”. During another tournament one year earlier, photographer Stephanie ”Vexanie” Lindgren captures an amazing picture of Jacob as he wins a game against the American player dizzkidboogie. 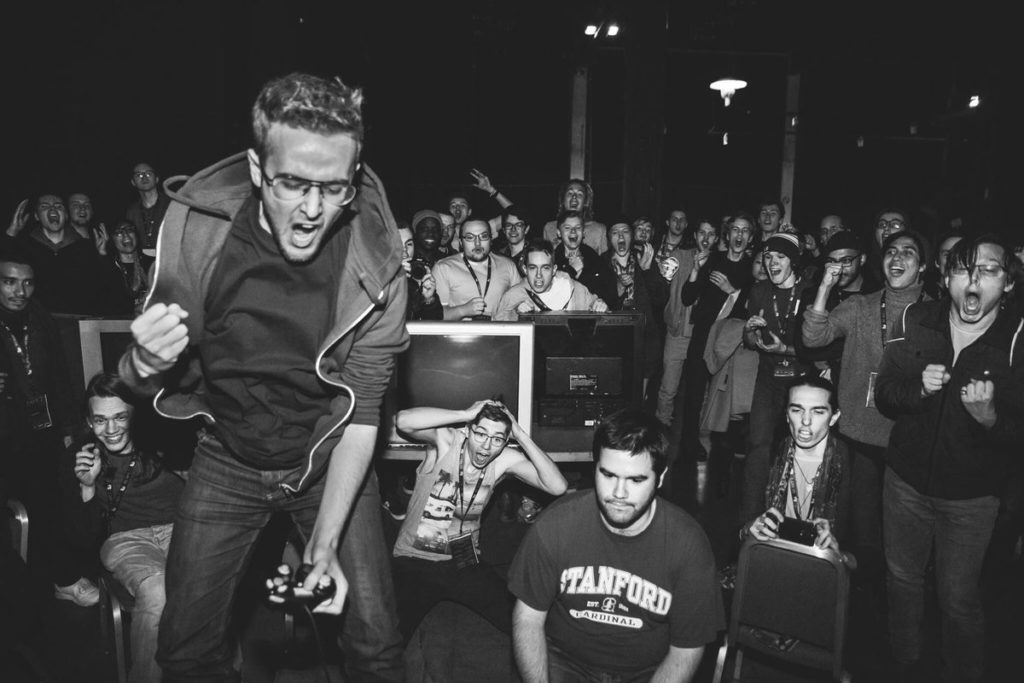 ”I’ve gotten a lot better at social networking. SSBM is a game where you actually meet up in real life and not only online, and it’s very rewarding that you have to communicate”.

To analyze and compete at a high level always helps in other aspects of life where it’s tough and complex.

The difference between playing and developing, according to Jacob, is that one is a hobby and the other one is a job. He does, however, see a difference when it comes to competing. “When I grew within the esports scene and became a name, the pressure also grew and has actually made playing a bit more of a job for me as well. It’s a very weird mix of it all”. Jacob’s next tournament is in Copenhagen at Valhalla, January 4-7. “It will be the first tournament where I play Super Smash Bros. Ultimate (he latest game in the series). I don’t have very high expectations since it’s such a different game, but it’s going to be fun. If nothing else, it will still be a relaxing trip”. In a short film by Julia Sthillert, you can follow Jacob when he competes at DreamHack Summer 2018.

In September 2018, Jacob started at Futuregames after three years of studying game development with a focus on graphics at Södertörns Högskola. Niclas Halvarsson, former Head Teacher of 3D Graphics at Futuregames, has helped Jacob a lot with motivation. “He’s really good at teaching and fun to listen to. If it weren’t for him, I wouldn’t be where I am today”. The realization of wanting to work with games came several years ago when Jacob worked at a plumbing company. “I drew pipes in 3D in AutoCAD. I realized that I enjoyed what I did, but wanted to work with people my own age. Where do you find them? The answer is within games”.

“If I hadn’t played an incredible amount, I probably would never have thought about making games. I think that you somehow look for a ‘safe zone’ or to be somewhere you see yourself. If you see yourself in games, it will feel safe to start working with it”.

Today Jacob’s goal is to become good enough to feel that he is a valuable asset in the games industry. “I’m open to try most things but right now I feel a little bit more drawn to stylized games”. In five years he hopes to see himself as a competent 3D developer with a job where he thrives and is doing well. Regarding what impact he wants to make on the world, Jacob says that he’s mostly here to have a good time.

I’m happy as long as I had a fun journey.

We are growing and need to strengthen our team in Boden with a structured Project Manager and Head Teacher for our new two-year yh-program "Futuregames Software Tester". Does this sound like an exciting position? Send us an E-mail and we will tell you more.

Want to get to know the world of Indie Games?